Welcome to Earth Science
Click here for the link to Interactives - Rock Cycle.  Play through the interactives, using the red link at the bottom of each page to continue.  When finished, read "The Story of the Wrightwood Marble" p93-97 in the Earth History Resource Book.  If you finish early, begin reading "Destroying and Reconstructing Earth" p100-105
Rock Cycle Quiz Game click here.
For Interactives -  Dynamic Earth, click here.
Project - “A Million”
Due Date: ???
Guidelines:
Your challenge is to come up with a way to represent “a million.”
The representation should be something that can easily be pictured in your head.
You may draw, sketch, paint, and/or copy&paste pics from the internet.  Your presentation must be:
• on a regular 8 ½ x 11 piece of printer paper – 20pts
• include at least 3 colors (black and white don’t count) – 20pts
• An explanation must accompany your visual representation – 20pts
• Both your representation and your explanation must be on the same side of the paper – 20pts
• Put your heading (H.A.N.D.) on the back of the paper – 20pts

Check out the layers of the Grand Canyon and how they formed by clicking here.

Plate Tectonics
The current theory about the movement of earth's crust is called Plate Tectonics. Earth's surface is broken up into large pieces called tectonic plates and these plates are always moving.  The areas where one plate meets another plate are called plate boundaries. 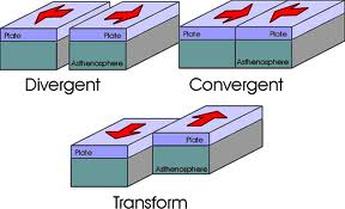 Plates in Motion
There are three possible boundary types between tectonic plates:

Geologic Time Scale
The current Era is the Cenozoic Era.

During the Paleozoic Era, small creatures thrived like fish and trilobites.

During the Pre-Cambrian Era, organisms were very basic, like bacteria.
Weathering & Erosion
"Weathering breaks it down.  Erosion takes it away."
Sediments
SOIL 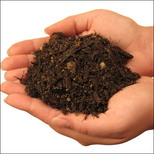 What is soil?
Soil is a thin covering of land areas on the earth’s surface. It is made up of broken up (weathered) rocks, mineral fragments, water, air, and organic material like leaves, roots, twigs, dead bugs and things like that.
To explore the different layers of soil and play an interactive game (Soil Safari) click here.

To play a game of Soiltris (like Tetris, but for soil) click here.
3 Principles of Earth History
Uniformitarianism (uniform-itarian-ism): processes that happen today happened in the past with the same results; "the present is the key to the past."  Examples of processes: Weathering, Erosion, and Deposition. Uniform = same.

Original Horizontality: sediments are deposited in horizontal layers.  When rock layers appear shifted, tilted, or warped, some process or processes must have occurred AFTER the original horizontal deposition to cause the shifting, tilting, or warping. 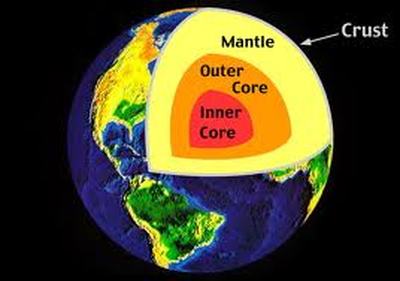 Earth is made of several layers.
Inner core:   solid iron
Outer core:  mostly hot melted iron
Mantle: mostly solid and rocky.
Crust: thin and brittle.  We live on the crust.
As far as we've gone, we've never been able to drill all the way down through the crust to the mantle.
Make a model of Earth's layers that's good enough to eat! For instructions how, click here.
The Rock Cycle